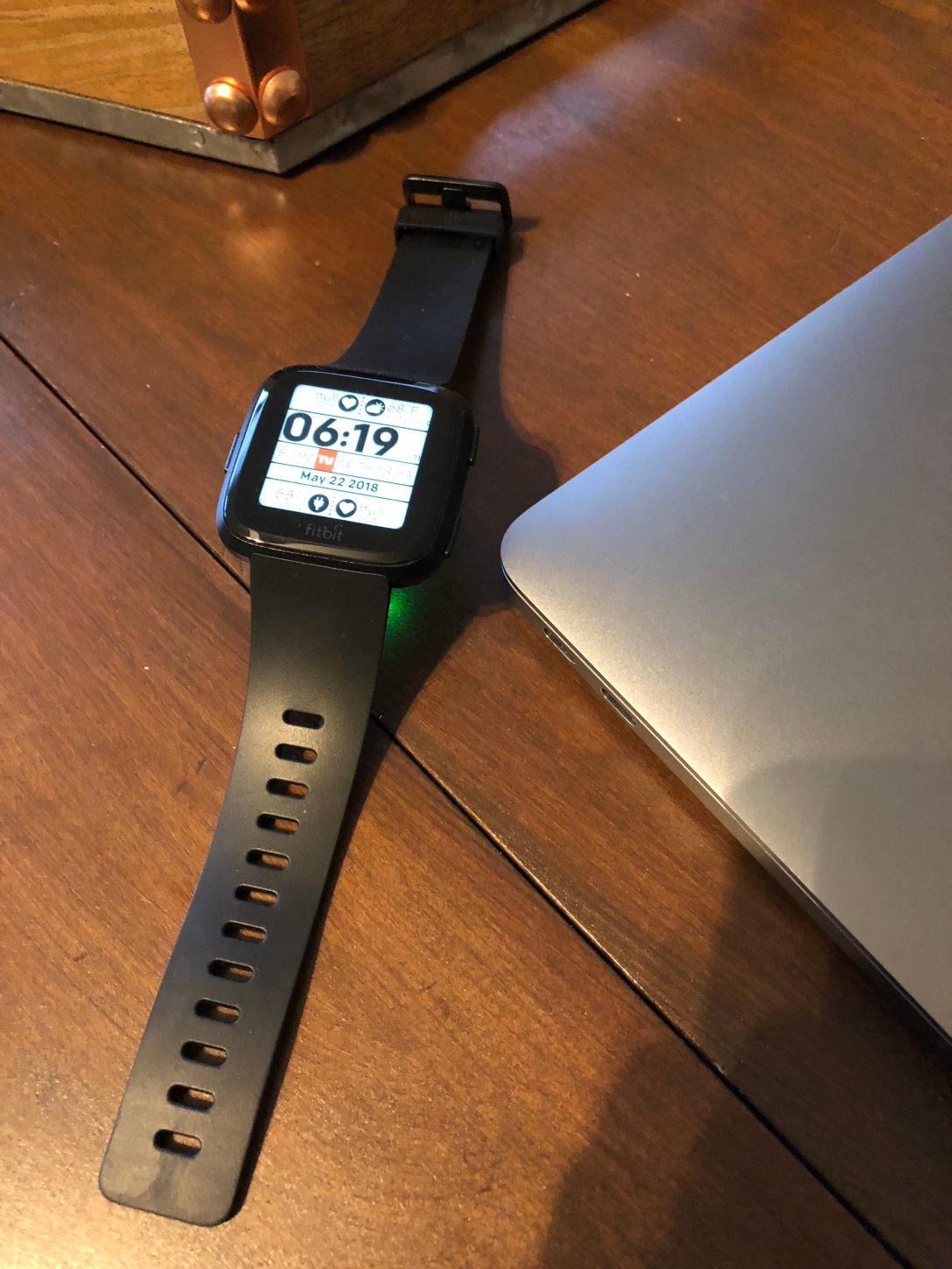 Apple Tree of Knowledge: Did you know that Apple considered the name of “iPad” for the first iPhone? 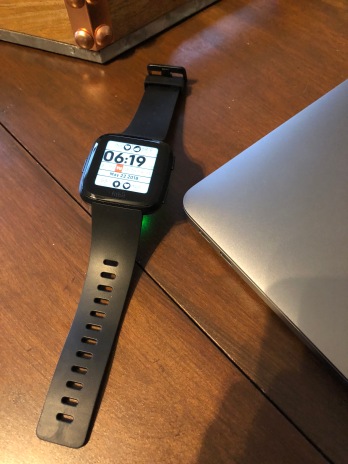 In a previous post, I commented as to why I had some interest in the newest Fitbit, the Fitbit Versa.

I was fortunate enough to receive one as a graduation gift from my fiancé and family. I wouldn’t shut up about it, when it was first released, and my fiancé got the hint.

I currently use an Apple Watch Series 2 but I am going to try to keep that out of this review but I will follow up with another post comparing the two. I want to give the Fitbit a fair review with no Apple Watch comparison.

The size of the screen on the Fitbit Versa is 39mm. This is a great size for both men and women. As someone with smaller wrists, I did not think this watch seemed too big on my wrist. For those with bigger wrists, unfortunately this is your only option to choose from. But hey, it does make your buying decision easier!

I am loving the weight of the Fitbit Versa. It is so light and sometimes I do forget it is one my wrist.  Having a light fitness watch is important when you are doing your workouts. You don’t want anything weighing you down anymore than you have to. 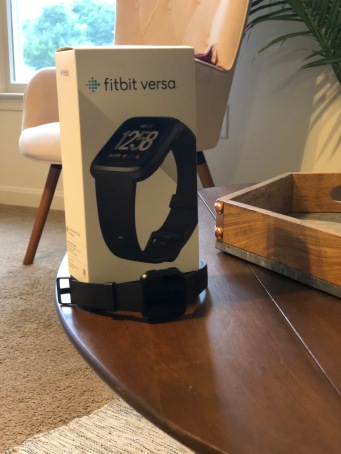 The Versa does come with a small and large silicone band and it fits comfortably. It isn’t some fancy band that you have to look up how to use, but it is your standard watch band. Speaking of bands, changing the bands wasn’t the easiest thing in the world. It reminded me of older watches that used a pin mechanism to replace the bands. It is straight forward, but again, not the easiest.

Ive never had a smart watch last more than two full days. So this was awesome! I got three full days out of the Versa. The three full days was with All Day Sync turned on. All Day Sync basically means it is constantly syncing with your phone to sync all of your data. Obviously, this will drain your battery. If you have any type of Fitbit, this is a setting that you should check to see if it is turned on or off. It may help your battery.

With All Day Sync turned off, I got a tiny bit more battery life but still had to charge that third night. So, essentially, I got the same amount of usage out of the device either way. I have read of people getting 5 full days out of the Fitbit Versa, I clearly did not.

The only thing about a device that has great battery life is that you might forget to charge it at the right time. You don’t want to be stuck with a dead Fitbit at lunchtime when you could have charged it the night before. As a best practice, I would charge the Fitbit Versa every two days or just top it off whenever possible. Something of this size does not take long to charge up.

The Fitbit Versa has three buttons: a back button, a top button and a bottom button.  Since the Versa is also a touch screen, you can navigate the Fitbit without the buttons and it sometimes makes me wonder why they put buttons on there to begin with. But I am glad they did, because sometimes, I cannot get my Fitbit to wake up. I tap on the screen, I raise it to wake and nothing. Then, the only way to turn the screen on, is that left “back” button. So, I am thankful they put some buttons on there to help when it is not functioning correctly. 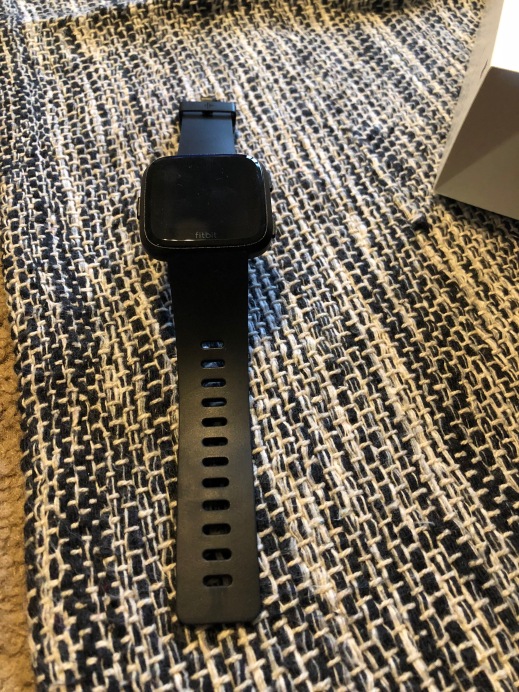 The raise-to-wake feature is something that should work 90% of the time in my opinion. It would be one thing if the Fitbit had an always on display but it doesn’t. I would say the raise to wake feature worked for me around 60% of the time. Which is annoying. I stand there looking silly as I keep flipping my wrist up to wake up the Fitbit and nothing happens. Soon, I just give up. Also, as mentioned before, even tapping on the screen will not wake up the device every single time. This feature should work 100% of the time since you are directly tapping the screen. But, again, that is not the case. When these simple functions do not work as intended, it becomes very frustrating. I have a lot of patience with technology and am pretty forgiving for stuff like this but I know the average consumer will walk away after too many issues like this.

The Fitbit Versa will give you text message and phone call notifications. They do work really well. The phone calls can be declined or accepted from the watch itself but if accepted, have to be answered on your phone. If you have an android phone, you are able to reply by voice to text messages. Us iPhone users, are stuck with just being able to read those notifications and that is it.

My Fitbit Versa shut off on me twice (with plenty of battery). Once for an hour and the next for a half hour. The first day, I kind of thought it was due to the heat as it was 90 degrees out. Once I was in air conditioning it seemed to function fine. The following day, it wasn’t hot at all and it did it again. I am not sure what caused this but it was unreliable enough to stick out in the my mind.

The Fitbit Versa will track your steps, distance, heart rate, calories burned, floors climbed and how many active minutes you have moved. As far as I can tell, it is very accurate. And it should be. Fitbit has been doing this, and improving, for years now. I would hope that their watches have become more accurate with every new release. 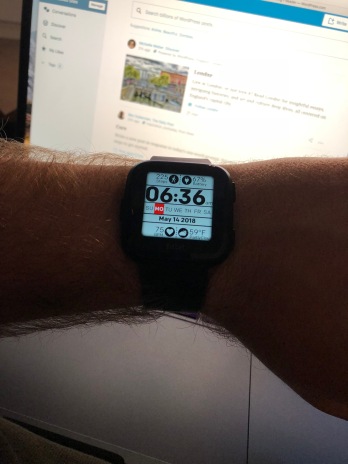 Under workouts you can choose from run, bike, swim, treadmill and weights. From the workouts I completed, which were all running, it seemed to be pretty accurate. One awesome thing about the workout function, is that it automatically paused the workout when I stopped. I had to stretch during my run at one point and it paused my workout. That was a very welcoming feature.

Again, when I wanted to view my current pace of the run, it was unreliable with the raise-to-wake feature.

I am a big fan of the watch faces available for the Versa. It seems like the developer community is very active and there are over 400 different watch faces to choose from. I love having a statistics heavy watch face. I want to see every statistic I can just by looking at the watch. 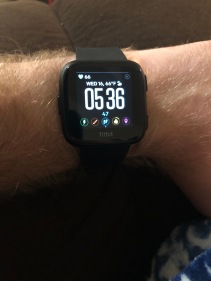 starts at $199.99 and also has a special edition that has NFC (for mobile payments) and comes with a more premium band available for $229.

The Fitbit Versa is by far the best Fitbit I have ever used.  I absolutely love the battery life, the custom watch faces and the fitness tracking. But as a smartwatch, it has a lot to improve on.

If you are looking to upgrade your Fitbit and have never had a smartwatch, I will tell you to go buy this, now!

It will not disappoint.

If you are in the market for a full fledge smartwatch, I would keep your eye open for something different. Fitbit is almost there and for the price, compared to competitors, they have done one heck of a job with the Versa.

Thanks for stopping in!

Disclosure: All links in this post are affiliate links, and at no additional cost to you, I will make a commission if you decide to purchase after clicking the link.

View all posts by Donnie